Cedar Education Lending
Average annual tuition at four-year private colleges for the 2011-2012 academic year is $28,500, up 4.5% from a year earlier, according to the College Board, a New York-based nonprofit that administers college entrance exams, while average room and board charges have risen 3.9% to $10,089. Between 2001 and 2012, tuition and fees at four-year private colleges rose at an annual average rate 2.6 percentage points greater than the consumer-price index. The priciest colleges now cost close to $60,000 a year.
Debt, too, is on the rise. Students who graduated from college in 2010 are shouldering an average $25,250 in debt, up 5% from a year earlier, according to the Project on Student Debt, a nonprofit research group.
The most important element in applying for financial aid is the Free Application for Federal Student Aid, also called the FAFSA, which determines how much in federal grants and aid a college-bound student will get. The form, which is used by all public and private universities, asks families to provide income and asset information, but doesn’t require you to report the value of your primary residence.
If you are attending a private college, families also must fill out the College Board’s CSS/Financial Aid Profile, which schools use to determine how to distribute their own aid funds.
The CSS takes into account factors that are largely ignored in the FAFSA. For example, the CSS looks closely at home values: Parents who have seen their home values tank in recent years should include the “quick sale” value of the homeâ€”which is roughly 80% of the value that the home is currently appraised at. Â If that value is substantially below your outstanding mortgage, it can increase your aid package. 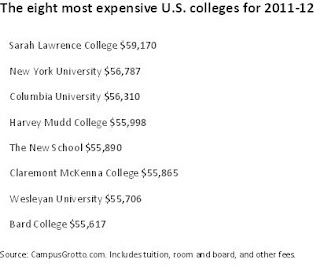 According to a recent article from the Huffington Post, tuition rates at four-year colleges and universities have risen over 32 percent in the last decade, and last year Americans took out more than $100 billion in student loans for the first time in our history. Student loan debt now exceeds credit card debt in the United States, creating an immense burden that will last years after graduation.

The problem will only get worse if Congress does not act soon. On July 1, 2012, student loan rates on subsidized Stafford student loans — one of the few programs that is affordable for students and families — will double, from 3.4 to 6.8 percent. In no uncertain terms, this would be another hit to middle-class and working-families, and a de facto tax increase on as many as 10 million people.

Making college more affordable is one of the best investments our nation can make in America’s economic future.Â  Call/write your Congressman!

The Project on Student Debt’s report included a list of schools with the highest student loan debtors. Students of the private schools listed below graduated with debt ranging from $40,400 to $55,250. public universities that produce graduates with the most debt. The public school debt ranged from $29,800 to $45,350. 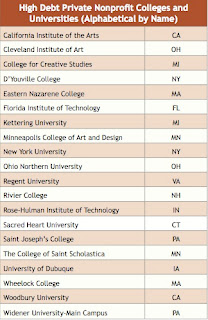 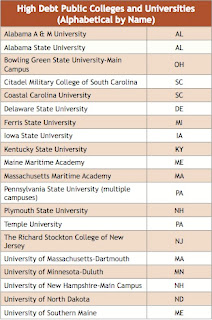 There’s been a lot of talk out there about the mounds of student loan debt recently graduates are dealing with.  If you are sitting with high variable interest rate private student loans or high fixed rate private student loans, you should do yourself a favor and at least look into what your options are- A private student loan consolidation may be able to lower your fee, provide one monthly payment, give you temporary relief with an interest only option, etc…If you can avoid it, do not extend the payment years, you will end up owing more over the life of the loan.
Calling all Graduates!
Did you get your first round of private student loan bills in the mail? How many checks did you have to write? Are you paying too much?
Well, we certainly think we can help.If you are looking for a competitive interest rate and the ability to consolidate all of you private student loans, what are you waiting for? With no hard sell and no obligation to take out a Private Student Loan Consolidation, you owe it to yourself to see if it makes sense for you.
Still unsure, check out the Private Student Loan Consolidation Calculator, which helps you better understand your potential savings and whether or not consolidation is the right choice for you.

A new feature on the Cedar Education website, the Private Student Loan Consolidation Calculator helps applicants better understand their potential savings and whether or not consolidation is the right choice for them. The calculator uses an applicant’s remaining loan balance and existing monthly payments to estimate the impact of a private consolidation loan on their monthly finances.

Cedar Education’s website allows you to calculate both your private and federal student loan refinance options for all of your student loan needs. 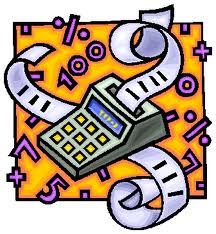 Our mission is to offer private funding options to students currently pursuing a degree, as well as recent primary or postsecondary graduates to supplement Federal Loan programs. Our private student loans offer competitive rates as well as attractive borrower benefits.