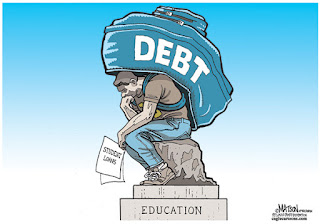 Concerns about the continuously ballooning percentage of unpaid student loans have prompted several lawmakers to pen a bill that would help lessen the number of students who have flunked out from paying their loans. The initially idealistic plan of letting students borrow money to sustain their education, then pay later once they are capable enough to earn has turned into something of a major economic concern.
Although there has been several restructuring that have been done with the payment and interest scheme, but it seems like it has been tainted with the current economic crisis that has affected not only the United States but some of the power countries as well. Thus, a bill called The Student Loan Debt Bomb Bill was created. Also known as The Know Before You Owe Act, this bill aims to:
Apart from these main points, students and lenders are also required to meet several requirements like double-checking the current status and the amount needed by the student from the school, a quarterly update to borrowers about their payables, and a report a certain student loans standing to the Consumer Financial Protection Bureau. This is to ensure that both parties are doing their responsibilities with each other.
This is a good bill, since it both protects the students and private student loan providers from unwanted situations like unpaid loans. Students are more aware of their benefits, and may very well exhaust all available resources offered by the government before turning to private student loan companies. If they do, they will be assisted by their schools in getting a loan that would be easier for them to pay. Private student loan providers, on the other hand, can partner with schools in getting borrowers who are good payers and are capable of paying what they borrow.
This bill is designed to help both the borrower and the lender, and let us hope that it will also help the economy put off another debt bomb in the form of student loans.