A growing number of colleges are taking smart measures to attract more students by cutting tuition or speeding up the rate at which they graduate.

While some private colleges are introducing double-digit percentage cuts in tuition or freezing prices altogether, other schools are offering three-year degree programs or four-year graduation guarantees.

In part, these schools are responding to consumers’ concerns about the rising cost of college.However, one has to be careful that all is not what it appears. Tuition cuts and freezes are usually accompanied by reduction in financial aid.The University of Charleston, for example, may be slashing tuition but it’s also reducing the amount of financial assistance that’s available to students to $10 million from $15 million. Instead of making cuts, other schools are freezing tuition at current levels or giving students four-year tuition guarantees. This still means students need to take out student loans and they need to continue toÂ be smart about shopping around for private student loans. 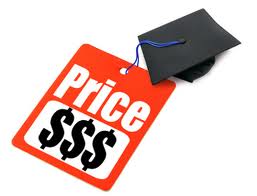 While making school more affordable for students has become more common, it’s still far from a widespread trend. Many more schools continue to hike tuition, he said. Overall, tuition at private colleges has been increasing more than 4% each year for the past three years, according to the National

At least 14 additional colleges have frozen tuition for the upcoming school year — the highest number of tuition freezes on record.

Beginning next year, Ashland University in Ohio is granting bachelor’s degrees that can be completed in three years instead of four — saving students an estimated $34,000 in tuition costs and giving them a year’s head start in the work force.

Ohio’s Baldwin-Wallace College is introducing a “Four-Year Graduation Guarantee” program this fall. Under the program, the school guarantees that students who meet certain requirements, like maintaining a GPA of 2.0 or higher, will graduate in four years. If not, the college will pay for the extra time.

Meanwhile, Lipscomb University in Tennessee is reducing the number of credits students need to take to graduate on time from 132 hours to 126 hours for the 2012 school year — the equivalent of about two classes.